In 1713, the Treaty of Utrecht awarded all of mainland Nova Scotia to Britain, forcing French forces to remove to Isle Royale (Cape Breton Island). In 1749 English settlers began to clear a site at Chebucto harbour for a settlement that became Halifax. The new town quickly became an important strategic fortress, first to counter the French at Louisbourg, and later as the warden of the north Atlantic. The military presence in the city meant that soldiers from across Britian would, at one time or another, call Halifax home.

By 1828, military officials decided that the Martello towers and seaside fortifications were not sufficient and began construction on a massive stone citadel on a hill overlooking Halifax harbour. In the early years, soldiers were garrisoned in either the North or South Barracks. According to Cameron Pulsifer, in 1835 the North Barracks accommodated 38 officers and 699 rank and file, while the South Barracks billeted two officers and 548 other ranks. In 1852, officials contracted a Quebec firm, headed by Simon and Henry Peters, to construct the Wellington Barracks. 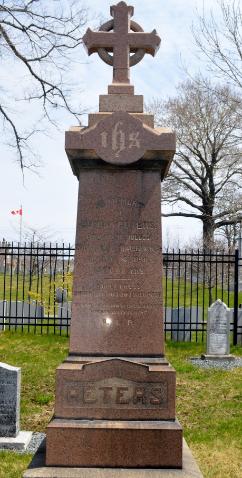 Roman Catholics in the British Army and Canadian Militia stationed at Halifax attended local churches and, as part of the congregations, often utilized the burial ground at Holy Cross. The records indicate that at least seventy-seven servicemen are interred in the cemetery, many after 1860. Although the vast majority of privates and non-commissioned officers were natives of Ireland, there are soldiers from Scotland and England interred as well.

Most of the soldiers buried in the graveyard died of the common medical issues of the nineteenth-century. For instance, John Byrnes (Co. Tyrone) lost his life to consumption, an illness that claimed the lives of many in the period. Edward Mulhall of Queen’s County (Laois) expired from "disease of the kidney," Thomas Condon (Co. Tipperary) died of a "hernia", and John Burns of Scotland perished from "inflammation of the lungs." 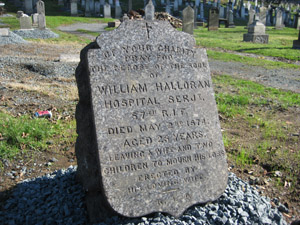 Some of the men stationed at the citadel died while carrying out their obligations. John Nichols of the Royal Engineers suffered ‘asphyxiation’ in the “line of duty”, Thomas Rielly (Co. Monaghan) died in an ‘"accident", while James McHugh of County Tyrone was killed in the summer of 1868 when the cannon he was operating at the citadel prematurely exploded.

Other soldiers that could not avoid the hazards of nineteenth-century garrison life died through suicide or acts of violence. In 1869 William Stevens of Devonshire shot himself inside the citadel, and a short time later Richard Long of Cork did the same. In 1895, John Hogan, a Sergeant Major with the Royal Engineers, shocked his colleagues when he poisoned himself in his Gottingen Street Residence. Other unfortunates died from "intemperance" and other issues related to the gin and rum shops. James Quirk of Galway, for example, died after suffering severe frostbite, having been exposed to the winter cold. In 1871 Peter Kavanagh died of the “effects of violence,” while John Gleeson of Tipperary actually “drowned” in the citadel. 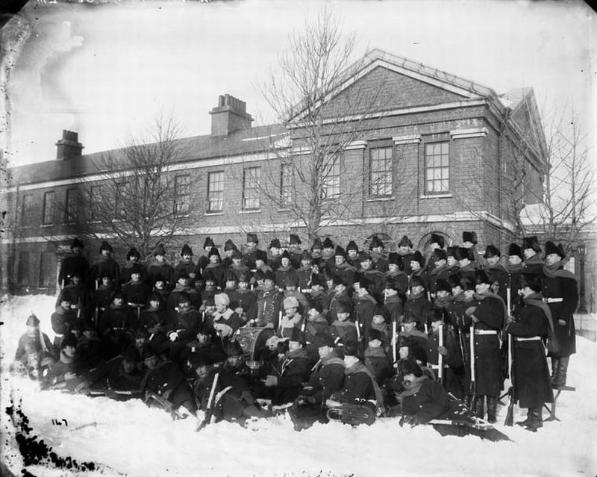 Many of the young children born in the barracks lived a mere month or two. Conditions were not ideal and they succumbed to the usual illnesses.  During the restoration of the graveyard (2007-2015), volunteers unexpectedly unearthed a gravestone in the children’s section of the cemetery. It belonged to young William Edward Fisher, aged two years and nine months, who died of the “croup,” an acute viral infection of the upper airway, in the autumn of 1870. Born at Quebec, William’s father, Robert, was stationed in Halifax as a member of the King’s Royal Rifle Corps (60th Rifles). In 1870, the elder Fisher had taken part in the “Wolseley expedition” to confront Louis Riel and his Metis force during the Red River Rebellion. The small stone simply read: "Sleep on sweet babe, And take your rest, God called you home, He thought it best." 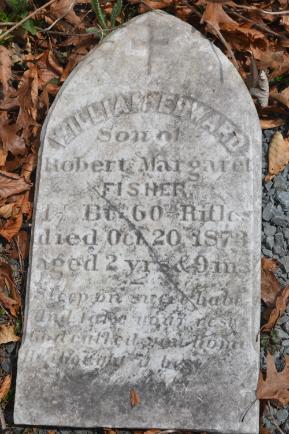 The soldiers that comprised the garrison of Halifax were a vibrant feature of Halifax society. Despite the poverty and disorderly atmosphere of “Barrack street” (now Brunswick Street), many men from the citadel raised families during their stay in Nova Scotia. These men and women contributed greatly to the Catholic community and to Halifax in general. The markers of military personal, their wives and their wee children that now rest in Holy Cross are a permanent reminder of this essential contribution.

A List of Soldiers buried in Holy Cross Cemetery