The Irish were prominent in every aspect of Halifax’s economy in the nineteenth-century. Members of the community served in the military, laboured on the docks, worked in manufacturing and others accumulated great wealth through business and trade. Perhaps no one worked harder than the Irish women of the city, and for those girls who wanted to enter the paid labour force, domestic service was usually the only option. Census materials reveal that hundreds of Halifax-Irish women worked as servants, cooks, maids and cleaners within the hotels, boarding houses and grand residences of the city. They laboured, typically behind the scenes, in the homes of every prominent Halifax family and hotel in the city.

Although hundreds of women buried in Holy Cross worked as domestic servants or housekeepers at some point in their lives, the burial records list only eighteen that died in service in the nineteenth-century. Very little is known about these women, but like others in the cemetery they had fascinating narratives. One of the markers in the cemetery belongs to Kuwicunda Spiegel, who immigrated to Halifax from Bavaria Germany. She not only possessed a unique christan name, but the unknown story of her journey from Europe to Nova Scotia presents many questions. It does seem likely that her name was misspelled on her tombstone. In Spiegel's hometown of Bamberg, there is a staute to Saint Cunigunde, the wife of the Holy Roman Emperor Saint Henry II. It seems very possible that Cunigunde was anglicised or  mispronounced as Kewicunda. 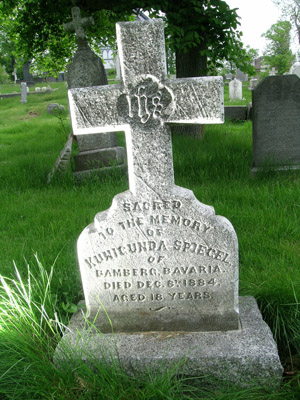 Women that died serving as domestics in the nineteenth-century: 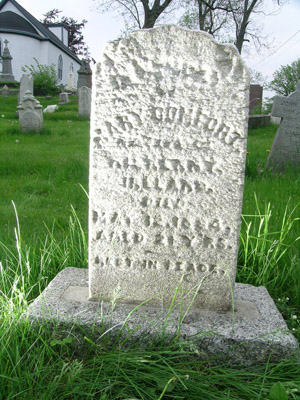 [Marker of Co. Kerry native Mary Comfort who died in 1884]

Each of these women had a unique story. One narrative that we have been able to piece together, is that of Bridget Lowrey (Lowry). Sir Edward and Ann Kenny owned an elegant property near the downtown, on what was then called Pleasant Street (now Barrington). The biographer of their daughter, Sister Ellie Kenny, wrote that their home always had “two or three domestics”. One of the women labouring at the Kenny home in 1871 was twenty-five-year-old Lowrey. Unlike the Kennys, whose lives and careers are well documented, we know very little about their servants.

Like many Irish Catholic girls staffing prominent Halifax homes in the nineteenth-century, Bridget came from the colony of Newfoundland. The daughter of a fisherman, she was born in 1846 to John and Bridget Pierce in St. John’s. She and her sister, Catherine, crossed the Cabot Strait around 1868 and Bridget promptly found employment with the Kennys. Her sister Catherine was not as fortunate and she was forced to spend some time in the Halifax Poor Asylum. The duties at the Pleasant Street home kept Bridget very busy; her work fatiguing and often menial. Employed by such a prominent family, the monotony of her obligations was occasionally broken by the fascinating social world of the Halifax-Irish elite. The social customs of this community have been described as “thoroughly English”, and Bridget would have arranged afternoon teas, prepared bedrooms for visiting Canadian politicians, and eavesdropped on the tales of military officers who “called” in the afternoons. Behind all the political meetings (Sir Edward served in the Canadian Senate), extravagant dinners and lavish balls laboured Bridget and her fellow servants.

Interestingly, although many domestic servants were married, they generally continued to reside with their employers. In 1869, Bridget wed Austen Lowrey (Lowry), a native of Ireland and solider in the Halifax garrison. In the early years of their partnership the young solider remained garrisoned with his regiment, while Bridget kept her room (and her job) at the Kenny residence. Sometime in the late 1870s, the couple moved to California to seek new opportunities. Like many other labourers in the Maritime Provinces, “Uncle Sam’s land” represented an opportunity to “rise in life”. Their time in California proved challenging. An economic recession hit the United States in the 1870s and California was particularly affected. In 1877 a daughter, Mary was born, and in October 1882, Austen and Bridget welcomed a son, William. Sadly, by the mid-1880s Austen was dead and Bridget had to return to Nova Scotia.

As a widower with small children, life in Halifax was challenging. Bridget returned to the domestic labour force, working more often as a “cook” as opposed to a “servant”. These were skills that were very much in demand. In the summer of 1889, the Acadian Recorder lamented “Every year the exodus of good servants to ‘the states’ has been growing, and this year, it is said, there is scarcely a good cook, housemaid, butler or footman left in Nova Scotia.” Bridget quickly found lodgings in a large “hotel”, and likely also worked in the establishment.

Initially Bridget had a difficult time looking after her children once they returned to Halifax and sent them to live with her brother-in-law, Charles Webber, and her niece Mary Futcher, who lived on Creighton Street in the north end of the city. Webber, a dockyard foreman, had married Bridget’s sister Catherine in 1871, but he was widowed in 1890 (Catherine was buried in Holy Cross Cemetery). By 1901, most of the family (Pierces, Futchers and Webbers) moved to the “Boston States”, but Bridget, employed as a “cook”, was finally able to share a residence with her nineteen-year-old William, who was employed in a local firm as a clerk.

Sadly, most of Bridget Lowrey’s story (and that of her extended family) has not yet been recovered. In early January, 1907, she fell and fractured her thigh while residing (and likely also working) at the Queen Hotel. Within weeks she was dead from complications relating to the injury. Her burial took place at Holy Cross Cemetery on January 11, 1907. We don’t have a picture of Bridget Lowrey, and her grave (like so many others at Holy Cross) is unmarked. Yet this hard-working woman represented the lifeblood of Halifax-Irish society. She and the thousands of women like her, now lost to time, built our community in the nineteenth-century and left a lasting legacy.