On the hill overlooking Holy Cross graveyard is Fort Massey Cemetery. The fort was originally constructed on a plot called “Windmill Hill” at the junction of what are now Queen and South Streets.  The fortification was designed as a square redoubt with a central blockhouse and wooden barracks for 250 men. Within a short time the west slope of the hill was designated as the Halifax garrison’s principle graveyard. According to Thomas Raddall’s Warden of the North, in the eighteenth century Queen Street was “a rustic lane resounding from time to time with muffled drums and the solemn tread of military funerals.” When cholera struck Halifax in 1834, the garrison was particularly affected. Each morning, according to the Acadian Recorder, the dead were brought to Fort Massey and buried in “crude coffins”, which were “dropped into long trenches.” 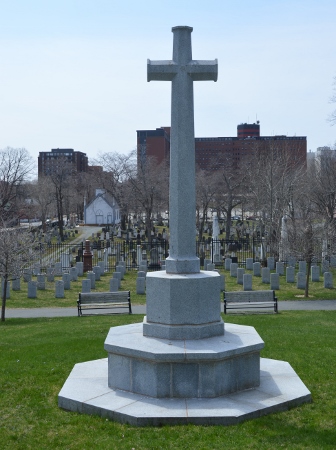 Like Holy Cross the grave stones in Fort Massey cemetery represent only a small fraction of the total number of burials. The burials date back to the eighteenth-century and include soldiers that served in both the Great War and the Second World War. The men and women that lie in the graveyard come from all over the British Empire, and similar to Holy Cross it is the final resting place for many young children of soldiers serving in Halifax. Currently, the graveyard is only one of two burial grounds owned and managed by the Department of Veterans Affairs. 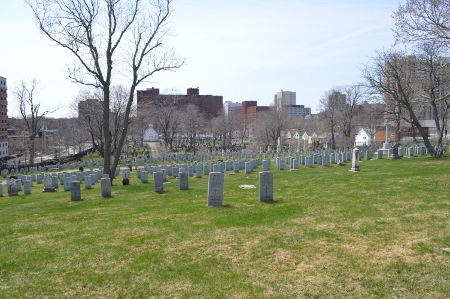