Holy Cross cemetery is the final resting spot for thousands of people who left Ireland to make a home in the new world. Their stories are interesting and diverse. In fact, the first Irish men and women to arrive in Halifax came via the Newfoundland fishery. Each year English fishing vessels crossed the Atlantic and anchored on the Grand Banks, while others plied the inshore fishery. In the process young Irish men found their way to Talamh an Éisc (the land of the fish). As early as the final decade of the sixteenth century, ships from the English counties of Devon, Dorset and Somerset on their way to Newfoundland, regularly stopped in the Irish ports of Waterford, New Ross, Dungarvan and Cork to acquire local foodstuffs and obtain fresh water. In Irish harbours sailors could acquire products such as woollens, which were cheap and plentiful, and more important, were “of good quality”. The English - Irish - Newfoundland trade intensified after the conclusion of the Seven Years War in 1763, and as England gained greater control of the north Atlantic fishery, the demand for Irish products intensified.

More crucial to the exploitation of the Grand Bank fishery than Irish foodstuffs was the large quantity of accessible labour in the southern counties of Wexford, Waterford, Kilkenny and Cork. By the mid-1740s, Ireland was experiencing a famine brought on by rapid population expansion and deterioration in commercial farming. However, although agriculture soon recovered, the population continued to increase, and the prospect of employment in the north Atlantic fishery represented a valuable economic opportunity for young males. West Country fishing captains hired Irish labour in droves for the season, and within a short time Hibernian fishing servants became commonplace among the fishing fleets and sack vessels on the Grand Banks.

As Terrence Punch has illustrated, by 1796 many of these Irish individuals “began to show up in Halifax.”  In 1797, the Catholic priest, Fr James Jones, mused that most of the Irishmen in his small congregation had come from Placentia, while in 1806 Nova Scotia Governor John Wentworth complained of the “useless Irishmen who pass annually from Newfoundland through the Province”. A few years later colonial authors Thomas McCulloch and Thomas Chandler Haliburton both wrote with hostility about the experiences of Irish Newfoundlanders in Nova Scotia. In 1821, McCulloch published the Mephibosheth Stepsure, a series of letters satirizing manners and frailties of colonial Nova Scotians, in the Acadian Recorder. In one letter, an Irishman finds himself in trouble with the law and thus “shipped himself off for Newfoundland; where during the course of the summer, the cod fishing afforded him abundant amusement”. McCulloch continued: “although the grog in the summer was very much to his taste; the prospect of starving in the winter was not so agreeable. This induced him with a cargo of his countrymen, to land upon our coast late in the fall a few years ago”.

Passenger acts were passed by the British government in 1823 and 1825, which aimed to rectify the deplorable conditions aboard some immigrant vessels. Although successful in its mission, the acts increased the costs of passage, so that by 1826 the number of Irish immigrants to Halifax dwindled.  There was fierce debate in Nova Scotia concerning the regulation of passenger ships from Ireland. Most believed that despite the escalating expenditure, it was “unchristian” to transport women and children in squalid conditions aboard dilapidated ships. Others, such as the colony’s former attorney general, Richard John Uniacke, an Irishman himself, believed that the alternative for many migrants was to reach America aboard a Newfoundland fishing vessel. Consequently, argued Uniacke, the acts actually made the situation worse. At least a few Halifax businessmen, Edward and Thomas Kenny for example, took advantage of the passenger acts to promote ships “of the first class” for Irish migrants. In the autumn of 1828, the Novascotian carried an advertisement from T & E Kenny advising persons with relatives in Cork, Limerick and Kerry that a large vessel was sailing from Tralee for Saint John New Brunswick and Halifax the following spring. Applications for the “desired opportunity” would be taken at the brother’s shop. 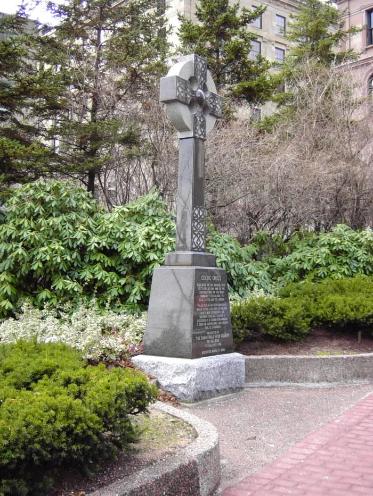 The port city of Cork sent many ships to Halifax, and consequently between 1825 and 1845, over half of the Irish residing in Halifax originated in that county. Not everyone stayed in Halifax for long. Many of the Newfoundland-Irish, and others that came to Halifax via the Miramichi timber camps, opted instead to continue onward to other parts of British North America or the United States. Those that migrated to Halifax directly from Ireland were, as Terrence Punch illustrated, part of the chain migration process. In other words, these individuals remained in Nova Scotia because they had family members in the garrison city. Like those that went directly to Newfoundland, the people that went out to Halifax were overwhelmingly from Kilkenny, Waterford, south Tipperary, and east Cork. Although the great potato famine forced millions of Irish families to migrate to North America between 1845 and 1852, very few of these people came to Nova Scotia. The Halifax-Irish are generally a pre-famine immigrant community.

Nicholas R. Burke, ‘Some Observations on the Migration of Labourers to Newfoundland in Pre-Famine Times’, Cork Historical and Archaeological Society, 76 (1971), pp. 95-109.

Mark McGowan, “Famine, Facts and Fabrication: An Examination of Diaries from the Irish Famine Migration to Canada.” The Canadian Journal of Irish Studies, Vol. 33, No. 2 (2007), pp. 48-55. (View McGowan Article)