From Tahrir Square to Halifax

Mohamed Ayman is working for a new Egypt 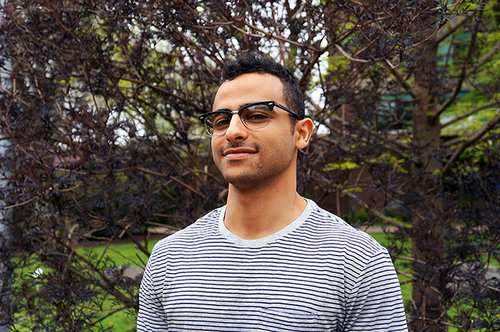 Along with tens of thousands of others, Ayman spent that day—and the 16 days and nights previous—in Cairo’s Tahrir Square, protesting the regime of Egyptian President Hosni Mubarak. When Mubarak resigned that afternoon, Ayman sent an email to a New York Times reporter for whom he’d volunteered as a translator during the protests. In it he wrote, simply, “Welcome to the new Egypt.”

“That was really the feeling then,” Ayman recalls. “That we were going to be something like Singapore in just a couple of years.”

Prior to the protests, the 19-year-old from Assyut, a small city in southern Egypt, had imagined himself working on marketing or in the financial industry. But the revolution crystallized for him what he really wanted to do: to “bring my interests in history and politics into one place, and figure out how I can work in and be a part of this new Egypt.”

Ayman decided then and there to make a 180-degree pivot, switching to international development studies. All that was left was to figure out where—though the story of how he made that decision is less dramatic: “I made an Excel spreadsheet.”

Ayman came to Saint Mary’s after comparing programs and universities across Europe and North America, evaluating academic factors, lifestyle factors (he preferred to live in a smaller city with a larger student population), and cost. The name that stood out after he crunched his preferred factors was Saint Mary’s.

Since arriving, his studies have focused on issues and ideas relevant to the past and present of his home country, including religious extremism, terrorism, and how Egypt can yet fulfill the promise of the 2011 Revolution. In particular, he’s interested in raising what he calls the “low bar” we have in the west when we discuss issues related to terrorism, Islam, and the Arab world, and our readiness to embrace stereotypes.

“So much international media is fixated on terrorism, and yet the discussion we have about it is based on deep misunderstanding and ignorance about the people and places involved,” he says. “We’re at the point that we believe the only way to stop a bad guy with a gun is a good guy with a gun.”

“So much international media is fixated on terrorism, and yet the discussion we have about it is based on deep misunderstanding and ignorance about the people and places involved.”

Ayman’s studies have focused on revealing the true complexity of political and religious conflicts, tracing the evolution of the Egyptian Islamic Jihad, a terrorist group that emerged during the 1970s and later became a founding member of al-Qaida. He argues that western colonial interests in the Middle East, and western support to oppressive regimes, have been a major reason that these organzations have grown so powerful.

Ayman will be coming back to Canada to pursue graduate studies, but for now, he’s back home, looking for work with a non-profit or non-governmental organization. The “new Egypt” hasn’t materialized the way so many had hoped it would—but Ayman is committed to seeing it become a reality, eventually.