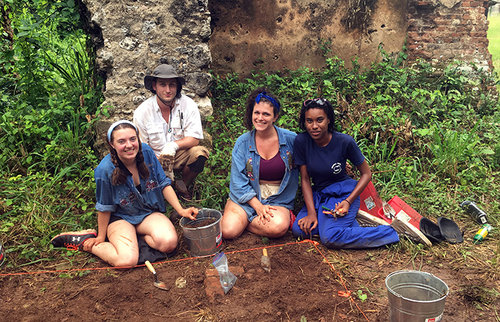 Saint Mary's students in Cuba at the Angerona plantation

In May 2015, part-time Professor of Anthropology Aaron Taylor was in Wolfville, on an archaeological field school. There was still snow on the ground, his exposed fingers were numb from cold, and he was he was eager to be inside—or anywhere  that was warm.
Kneeling on the frozen ground, a student asked him, “If you could dig anywhere, where would it be?”

The answer wasn’t just a wish for a more hospitable work environment. Taylor—a graduate of Saint Mary’s Anthropology and Atlantic Canada Studies programs—had been a frequent visitor to the country, and was fascinated by its history and culture. His curiosity piqued, he contacted the Cabinet of Archaeology for the City of Havana—and within weeks, the ball was rolling.

“When the Cubans realized we wanted a real collaboration—because they’ve had a lot of requests from people who just want have access, but not work with them—they responded really positively,” he says. The resulting collaboration is the only one of its kind between a North American university and a Cuban institution, creating a unique opportunity for local students.

This summer, a full cohort of students from Atlantic universities travelled to Cuba for the first in what will  hopefully become an annual field school at the Angerona coffee plantation, a Cuban national historic site 60 kilometres southwest of Havana. It’s almost entirely archaeologically untouched, and Taylor hopes that he and his students—working in partnership with Cuban students and professional archaeologists—will help to uncover the history behind the site, and help reveal something about the lives of slaves, which have otherwise been lost to time.

“It’s important to give voice to those who have had no voice,” says Taylor. “Angerona is the Roman goddess of silence, and the plantation owner had a statue of Angerona on the site, holding a finger to her closed mouth. The message was, ‘what happens on the plantation stays on the plantation’. People were born, lived, and died there without any access to the outside world, and archaeology is one way to give them a voice.”

The plantation, which was in operation for most of the 19th century, housed more than 450 slaves at its peak, and was among the largest slave plantations in the Carribbean. What’s buried under its soil may reveal a great deal about not only Cuban history, but about the globe-spanning Atlantic slave trade as well.

There are even connections to the Cuban field school right here in Nova Scotia. “The Cubans weren’t aware that Canada even had African slaves,” says Taylor. “Lots of fish caught off Nova Scotia waters went to feed slaves. Finding those parallels was really interesting to them, and they’re doing work in their archives to find more connections.”

Students lived in the town of Artemisa, staying with local families and experiencing Cuban culture in their off hours. They also spent two days in Havana, touring museums and historical sites, and cutting loose a bit: “There was a lot of fun and mojitos,” says Taylor. “But when it was time to work, this level of professionalism came over everyone. These weren’t just artifacts to be bagged—they were the remains of people’s lives.”