He shoots, he scores

After five years in a U.S. prison, former NHLer Mike Danton came to Saint Mary’s in 2010 aiming for a second shot. He got it. 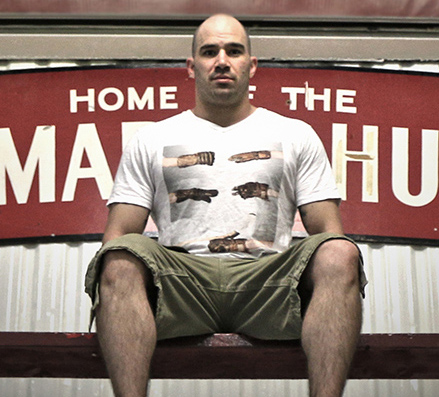 When Mike Danton arrived at Saint Mary’s in 2010, he was in need of a second chance: 29 years old, he had only a high-school education, no career, and had spent the previous five years in a U.S. prison.

Six years prior, Danton was a rising NHL star with four seasons under his belt, first with the New Jersey Devils and later with the St. Louis Blues. But in 2004, he pled guilty to a serious crime and served 63 months, mostly at a U.S. federal prison in Minnesota. He was a model prisoner, taking correspondence courses from Queen’s University, and was transferred in 2009 to a Canadian facility near Kingston, Ontario, before being granted parole later that year.

Upon his release, Danton was living in a friend’s Toronto condo. He had no idea, he says, “if anyone would want me—in any way, for anything, ever again.” But weeks after his release, he started to get calls from Canadian universities interested in recruiting him.

“Most of them seemed interested because of what I used to be,” he recalls. “But Saint Mary’s seemed truly interested in giving me that second chance; Stieny [head hockey coach Trevor Stienberg] wasn’t sure that I’d even be able to play. But he said, ‘Come, help with the team, be involved, and you’ll get an education.

“I’ll be 36 this year. I started skating when I was three, and playing when I was five. I have 27 years invested in this sport... I can’t just walk away.”

When he arrived on campus, Danton was more than a decade older than most classmates. After so long out of school he had to “learn all over again how to study,” becoming a frequent, solitary fixture in the Patrick Power Library.

Danton chose a double major in Psychology and Criminology, in part because of his experiences in prison, where he worked closely with a clinical psychiatrist and a psychologist, who helped him explore his childhood (“the worst you can imagine,” he says). “When I was locked up I knew I had issues,” he says. “The psychiatrist helped me get in touch with a different way of thinking…previously I had been extremely impulsive and barely thought of repercussions. Working with him I became a lot more thoughtful and careful. The change in my personality was incredible.”

Psychology professor Dr. Lucie Kocum recalls the first time she became aware of Danton—watching news of his arrival at Saint Mary’s on television news, from her then-home in Ottawa, just before she moved to Halifax to begin teaching.

“I had some pride then I’d chosen a good place to teach, a university that provides opportunities to those who need them.” She didn’t think of Danton again, until he showed up in her Research Methods class. “His contributions were always lively,” she says. “I don’t want to suggest he was a class clown, but there was very good humour. But he was always striving for high achievement.”

Today, Danton is planning on doctoral studies in psychology. He’d like to work with athletes troubled by drugs, injuries, and depression. When he was released from prison, his own life experiences were virtually all Danton had to draw on. He’s “earning the academic background, and [has] the professional ambition,” to put those experiences to work to help others.

“I’ll be 36 this year,” he says. “I started skating when I was three, and playing when I was five. I have 27 years invested in this sport. That’s more than any accountant or lawyer or professional my age has in their field. I can’t just walk away.”