A cultural artifact of international significance the Salzinnes Antiphonal is a mid-sixteenth century choir manuscript, containing the liturgical text and music for the Divine Office. The manuscript includes the Temporale, Sanctorale and the Commune Sanctorum and covers the winter season, beginning with the first Vespers, the Saturday before the first Sunday of Advent and goes to the Easter Vigil. Of special significance however, are several striking illuminations of varying sizes which reveals a unique insight into the spiritual and cultural lives of the nuns from the Abbey of Salzinnes. As a rich historical document, it provides a rare perspective into their socio-economic conditions, liturgy, musicology, and art history.

The antiphonal was commissioned in 1554-1555 by Dame Julienne de Glymes, former cantrix and prioress of the Cistercian Abbey of Salzinnes near Namur, present day Belgium. Written in Latin in a late Gothic hand on parchment, the manuscript measures 61.5 x 39.4 x 14.5 cm. and weighs a hefty 16.3 kg. It contains 240 folios or 480 pages, and includes two volumes bound together. Special features include richly decorated illuminations in gouache ranging from beautifully embellished text initials to stunning full-page images of Biblical and non-Biblical scenes, and full-length portraits of thirty-four nuns including Cistercian, Carmelite and Benedictine. Each portrait is identified by name in cursive or block script and in some cases, their positions within the Abbey. Cistercian portraits include three named abbesses, a prioress and assistant prioress, as well as regular members from the convent. Patron`s coats of arms are also included in honour of the manuscript`s patrons, the Glymes family. These special attributes confirm the significance of the Salzinnes Antiphonal as a hybrid memorial record of commemoration, monastic kinship and communal devotion, and a dedicatory record to the Glymes family as patrons.

Founded in 1196-97 by Philip the Noble Count of Namur, the Abbey of Salzinnes was incorporated in the Cistercian Order in 1204 under the Diocese of Liège. The convent was destroyed by the French Revolutionary army in 1794-95. The only remnant that remains today is an arched gateway known as Porte St. Julienne.

The Antiphonal and Saint Mary's University 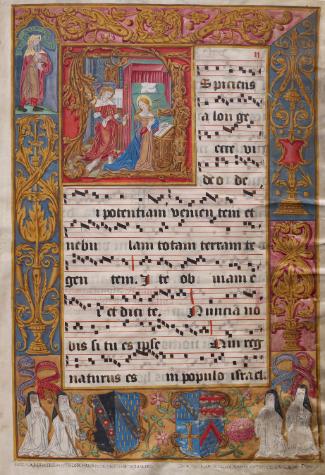 The antiphonal was likely brought to Nova Scotia by Bishop William Walsh, the first Archbishop for the Archdiocese of Halifax in the 1840s or 1850s. It was briefly displayed at the Horne LIbrary, Saint Mary's University, in 1955 as part of the visit of a papal delegation. It was permanently donated to the Patrick Power Library, Saint Mary's University by Archbishop James. M. Hayes in 1975. The Antiphonal was catalogued by librarians as a "Roman Catholic Antiphonary", and was stored in the climate-controlled Rare Book room.

In 2000 it was loaned to Judith Dietz (at the time, Manager of Collections and Gallery Services) at the Art Gallery of Nova Scotia for potential exhibition in a display of religious art, and for examination and research. As a graduate student at Saint Mary's University, her thesis centered on the Salzinnes Antiphonal resulting in its detailed study and identification in addition to several related multi-disciplinary projects focusing on the music, Latin transcription and ultimately the manuscript’s conservation and first public exhibition. 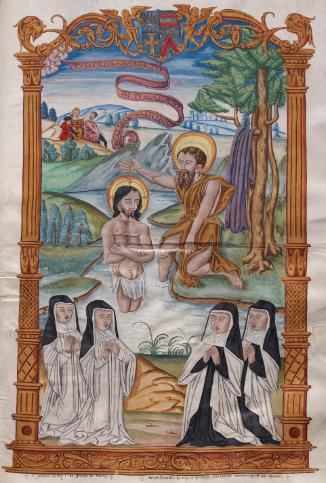 Since its arrival in Ottawa in 2007, the Salzinnes Antiphonal has undergone several years of intensive examination, analysis and conservation treatment at the Canadian Conservation Institute (CCI) in partnership with Library and Archives Canada.  Numerous scientists, conservators, technicians and specialists, both national and international were involved in its preservation. Three videos produced by CCI highlighting the technical analysis, the conservation of the text block and the conservation of the binding can be found here:

Conservation of the text block: https://www.youtube.com/watch?v=bSW4DpX4RdY&t=10s

Conservation of the binding: https://www.youtube.com/watch?v=XKEUD_OJkTw&t=3s

A promotional video produced by CCI for the major exhibition presented at the Art Gallery of Nova Scotia can be seen here: https://www.youtube.com/watch?v=GwjFlgJBrqk 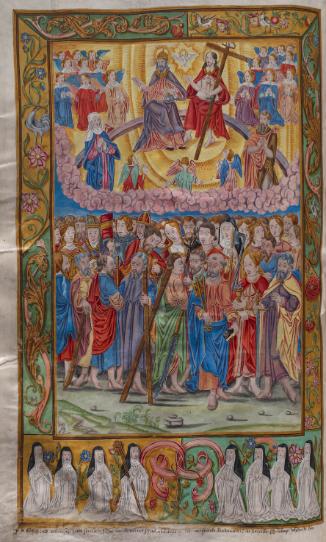 To celebrate its homecoming and present the newly restored manuscript in its first public viewing since its creation over four hundred and sixty years ago, the Salzinnes Antiphonal was featured in a major exhibition at the Art Gallery of Nova Scotia. Curated by Judith Dietz the exhibition, Centuries of Silence: The Discovery of the Salzinnes Antiphonal was displayed in 15 rooms on the gallery’s 3rd floor from May 5, 2017 to January 28, 2018,

In order to place the antiphonal in cultural and historical context over 150 works were assembled from collections in Canada and Europe.  Special loans of thirty works from nine major institutions in Belgium included paintings, prints, and drawings, as well as rare archival documents from the 13th century. Either originating from the Abbey of Salzinnes, depicting the Abbey and its period in history and its provenance; the works included landscapes, architectural drawings, life-size portraits, maps and manuscripts.

Seven public program events featuring the manuscript’s history, music and conservation, as well as a major concert were presented over the exhibition time period which saw over 53,000 visitors.

For more information on the exhibition visit: https://www.artgalleryofnovascotia.ca/exhibitions/centuries-silence-discovery-salzinnes-antiphonal

A 238 page exhibition catalogue, Centuries of Silence: The Discovery of the Salzinnes Antiphonal written by Judith Dietz with essays by Jean-Jacques van Ormelingen and Jennifer Bain, accompanied the exhibition. In addition, a music CD, Salzinnes Saints which features a selection of the plain chants performed by Psallentes under the direction of Hendrik Vanden Abeele, Leuven, Belgium is also available from the AGNS Gallery Shop.

The catalogue and CD are available on-line here: 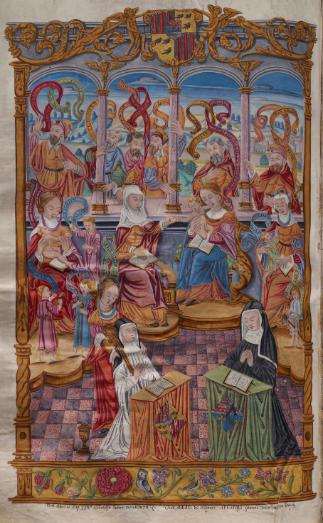 Cantus Ultimus - a state-of-the-art research environment where both manuscript music and text are fully searchable.