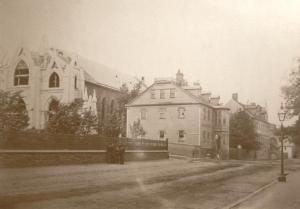 Other views: Interior view (no date)

Original home of Saint Mary's College from 1802 until the death of Bishop Burke in 1820. Located beside the Saint Mary's Basilica on Barrington Street. ‌‌

Text of the Glebe House Marker
(located on the corner of Barrington Street and Spring Garden Road):

On this site in 1802 was erected the school building which became the forerunner of Saint Mary's University.

Edmund Burke, newly appointed as Roman Catholic Vicar General in Nova Scotia, had the two-storey structure built in the hope of extending educational opportunities for Catholic young people and training candidates for the clergy. Burke's initiative encountered repeated delays caused by opposition from the political establishment of the day and by the scarcity of qualified teachers, but he ultimately prevailed.

Burke took up residence in the schoolhouse, also known as the Glebe House, and began to instruct young men for the priesthood. A school for boys was established in the same building and prospered. Appointed Vicar Apostolic in 1817 and consecrated Bishop in 1818, Burke was a strong and skillful advocate for Catholic education. Although Burke's death in 1820 brought further interruptions to the educational work he had set in motion, degree granting status was conferred upon Saint Mary's in 1841. 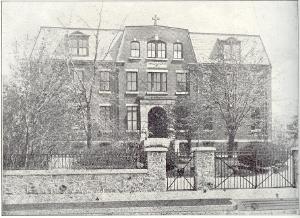 Home of Saint Mary's College from 1903 until 1952. Located on Windsor Street in the north end of Halifax. ‌‌‌

Text of the Windsor Street Marker
(located on the grounds of the St. Vincent's Guest House):

On this site in 1903 a three-storey brick and granite structure opened to house Saint Mary's College.

Cornelius O'Brien, then Archbishop of Halifax, led the effort to reopen the College which had been closed since 1881.

After a decade of leadership by the secular clergy of the Archdiocese, the Christian Brothers of Ireland assumed the administration of the College in 1913.

Over the next twenty-seven years the College increased its enrolments at both degree and high-school levels, and additions to the campus were completed.

The direction of the College was taken over by the Society of Jesus (the Jesuits) in September of 1940. Shortly thereafter, it became apparent that the needs of the College were rapidly outgrowing the Windsor Street campus. The Archdiocese of Halifax purchased land for a new campus in the south end of the City in 1943.

The relocation of the College to its new home on Robie Street was completed in 1952, resulting in the closure of the Windsor Street campus. 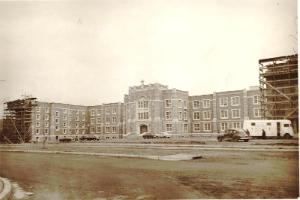 The current home of Saint Mary's University, construction was begun on this campus in 1949, and the move from Windsor St. was finished in 1952. Visit the McNally renovation micro-site for more information on the history of the McNally building.

Text of the Robie Street Marker:
On this site in September 1951, the McNally Building opened to house Saint Mary's College and High School.

When it became apparent that the needs of the College were rapidly outgrowing the Windsor Street campus, the Gorsebrook Golf Club, formerly the Enos Collins estate, was purchased in 1943. The development of this new campus was delayed until 1949 due to the post-war steel shortage. Archbishop John Thomas McNally, for whom the building was named, oversaw the construction. The building included a library, a chapel, a gymnasium, classrooms, laboratories, offices, and accommodations for boarders and faculty. Saint Mary's was then acclaimed to have the most innovative campus design in Atlantic Canada.

The relocation of the College from the Windsor Street campus began in 1951 and was completed by the end of the following year. The educational leadership of the Society of Jesus (the Jesuits) continued with the broadening of course and program offerings. In 1952, Saint Mary's was granted university status by an Act of the Nova Scotia Legislature. The High School closed in 1963 having educated nearly 2,000 young men. Further legislation passed in 1970 transferred governance of the University to a secular Board.

Saint Mary's has been shaped by significant changes such as co-education, globalization and extensive physical expansion. The University is committed to academic and research excellence and accessibility. Its international faculty, staff, student population and alumni, and worldwide outreach have produced today's thriving cosmopolitan University.

The commemorative stamp issued in honour of the 200th Anniversary of Saint Mary's is reproduced on this marker.

(Text of the Robie Street Marker, dedicated June 5, 2003, and located in front of the McNally Building).