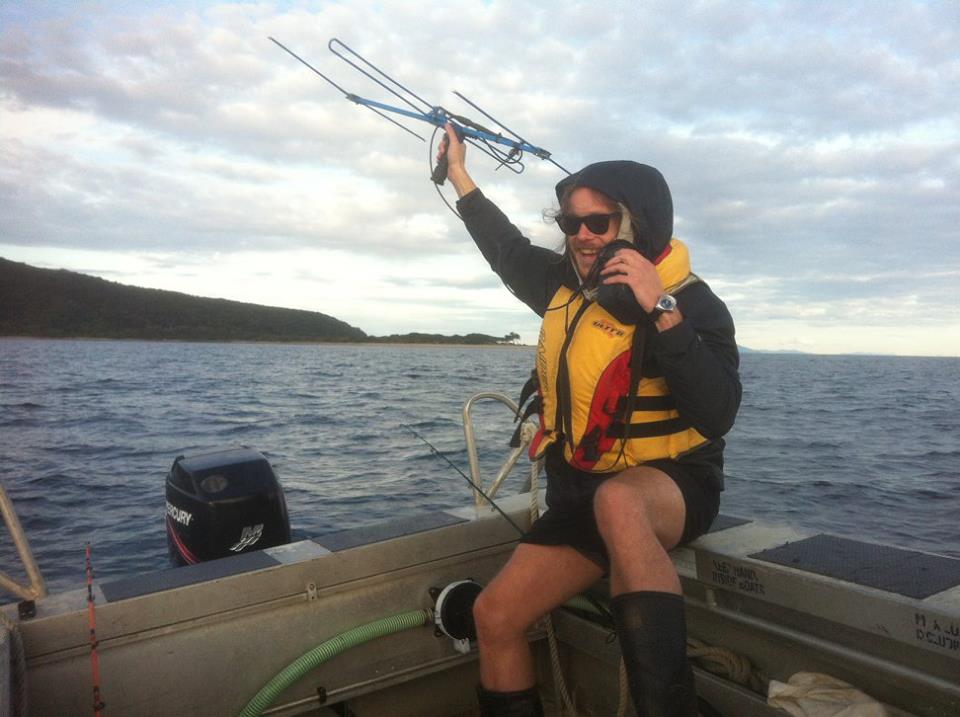 After earning two degrees from Saint Mary’s, Dr. Zenon J. Czenze is now a Post-Doctoral Fellow at the University of Pretoria in South Africa. We recently caught up with him doing research in the Kalahari Desert where he spoke about his current work, career path, and his time at spent at SMU.

Why did you choose Saint Mary’s and what was your field of study?

Both of my parents graduated from SMU in the 80’s and my dad played football there under Larry Uteck. My parents stayed in Halifax and, as a baby, I was taken to almost every Huskies game. After high school, although I had many options for post-secondary education, there was only really one choice – Saint Mary’s.

I graduated from SMU with a double major in Biology and Psychology with an Honours in Biology. From a young age, I was interested in science and especially passionate about wild animals. Through the wide range of courses available to me at SMU, I was able to focus and refine that passion for animals into the beginning of a career as a biologist.

Could you tell us about your Saint Mary’s experience?

I had a blast at SMU! Whether it was in the classroom, watching the teams, or at the Gorsebrook. The atmosphere was super positive (even in the dead of winter) and I’m happy to say that when I get to visit the campus it feels the same. Obviously, there was a lot of hard work and study that went into my time at SMU. However, there was always an avenue to relax, decompress, or have fun at the end of a busy week.

How do you think SMU grads differ from those who’ve studied elsewhere?

I think SMU Science graduates have the benefits of smaller class sizes, especially after first year, which students from larger Universities may miss out on. I think it is a huge benefit to be able to engage one-on-one with professors before, during, and after class on a first name basis. It is less intimidating to ask questions and receive extra guidance from professors who know your name!

What is your current role and field(s) of research? What factors/experience led you to this area?

Currently, I’m a Post-Doctoral Fellow at the University of Pretoria working with Prof. Andrew McKechnie. The work we are doing focuses on heat tolerances and cooling efficiencies of birds and mammals that live in desert ecosystems (I’m actually in the middle of the Kalahari Desert right now!).

By understanding how these animals manage to live in some of the harshest environments on the planet and their limits in terms of environmental temperatures, we can predict how certain species may be impacted by climate change. This can help environmental managers pinpoint specific populations that will be under the greatest threat of increasing temperatures.

Believe it or not, my journey to working on hot African birds began at SMU by studying the fleas and mites that lived on Nova Scotian bats. The skills I acquired working with Prof. Hugh Broders on bats allowed me to pursue a Master’s at the University of Winnipeg with Prof. Craig Willis.

If you weren’t in your current role as Post-Doctoral Fellow, Department of Zoology and Entomology at the University of Pretoria, what would you be doing?

Ever since taking Prof. Colleen Barber’s behavioural ecology course at SMU, I’ve had a singular goal to become a biologist and academic. So, if I wasn’t a Post-Doc here, I think I’d be a Post-Doc somewhere else!

What’s the best part of your role as a Post-Doctoral Fellow and researcher?

I think the opportunity to continue to learn and acquire new skills as a biologist is probably my favourite part of the position. I get to stay involved with university life, teach, and mentor aspiring young biologists - all of which are pretty great! Also, I get to continue doing field work and catch animals in the wild, what’s not to love?

How have the skills and knowledge you acquired at Saint Mary’s help grow your career?

I think that if you want to continue your education after undergrad and pursue post-graduate degrees you need to be independent, hard-working, and know how to study. My experience in the Honours program at SMU, was massively influential and outlined how to design projects correctly, read the literature effectively, and write academically. Without that knowledge my transition to a master’s would have been very challenging.

What was the most beneficial thing you learned or experienced while attending Saint Mary’s?

I think the most influential thing I was told was that no matter what your goal if you’re prepared, show up on time, work hard, and remain positive you will have a shot at achieving it. The best part is that none of those attributes require any natural talent.

Do you have any career building advice to offer fellow alumni?

Try to give before you take. Regardless of your occupation, you’re going to need to rely on a network of people to succeed. In my experience, nothing makes people want to help you more than helping them. Any gesture you can do along the way to help someone, do it. As it is easy and often times, I’ve found people remember you fondly for it and may recommend you to potential collaborators or employers.

When you reminisce about SMU, what comes to mind?

I guess pride. Like I said, Saint Mary’s has been part of my life since I was a baby, so I have an almost familial attachment to the University. I’ve been fortunate enough to graduate from three outstanding universities but SMU will always be my alma mater.