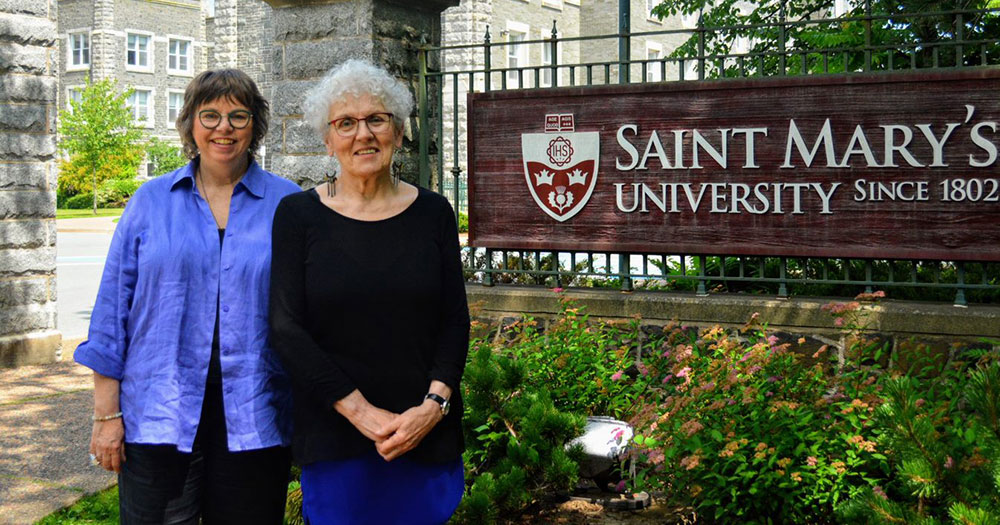 “We wanted to offer the community a different way of looking at violence against women.”

Could you tell us about Persons Against Non-State Torture and what led you into this area of advocacy?

Jeanne: Linda and I were doing private consultation work one evening a week in addition to our full-time jobs as nurses. We wanted to offer the community a different way of looking at violence against women. About six months into the consultation work, I received a call from a woman who said she was going to kill herself. That’s what led us into non-state torture, because in building a relationship with her over time she started to disclose her experiences. Since then, we’ve been trying to get Canada to criminalize torture when it’s perpetrated by private individuals.

Linda: Also, from that woman’s experience, we realized that this wasn’t unique to her and her family. We did some research and found other women in the province with similar stories. It was then that we decided to go beyond one-on-one healing and made a commitment to helping all children and women who are in that situation.

You’ve both been advocating for human rights for 26 years. In that time, have you seen progress?

Linda: When we started telling the story of the first woman that came to us, people thought we were crazy. This was 26 years ago and it’s not an exaggeration to say that people thought we were mentally ill. We’ve gone from that to people recognizing that we have a point. Now we’re at the stage where the country recognizes non-state torture happens and that the issue is an important one. It takes a long time for progress and we’re still working on changing the criminal code.

What is happening right now in relation to non-state torture that everyone should know about?

Jeanne: People should know non-state torture exists and become familiar with it. We’ve been asked to change the name, but this is the language that is commonly used and understood globally. People also need to understand that it happens in Canada. Also, that there is a population of families that exert acts of atrocity and that it can happen to a child of any age.

Linda: I would ask that people be willing to change their world view on the reality of what family is. To shatter the myth that all parents mean the best for their children because not all do. Non-state torture happens everywhere and it’s an everyday reality around the world. Let’s accept it and move on to how can we reduce and prevent it.

What can a person do to help this cause? Is there a call to action for the general public?

Linda: First of all, educate yourself and talk with others. Write the Minister of Justice and say you want the criminal code changed to include non-state torture. Also, teach your children about it and add it to school programming. If you’re a nurse, emergency worker, social worker, police officer, or a lawyer think about non-state torture when you’re assessing a person.

Jeanne: Universities can also think about how they might introduce it in classes to expand students’ thinking.

Why did you choose to study at Saint Mary’s? What in particular drew you to the MEd program?

Linda: We wanted an educational model to use in our work and wanted to expand our credentials. Saint Mary’s was the best education of my whole life. It was the first school I attended where I felt I could really flourish and broaden my mind. I use Friere's popular education model daily.

Jeanne: For me, it was the flexibility of the courses and the variety. In the book I’m writing for Linda and I, there are examples from the courses we took such as journaling.

How do you feel your education and experience in nursing supports what you’re trying to accomplish with Persons Against Non-State Torture?

Linda: Because we understand the human body so well, we understand the body talk and responses a victim of torture can have. As nurses we know that victims often re-enact the torture and we can identify it as a non-medical emergency. They were having normal post traumatic stress responses.

Jeanne: Many of the women felt they were exposed to human evil so they were worried that the torturers had somehow affected their bodies. As nurses, we were able to explain the biology and anatomy to them. We were also able to explain that our bodies remember things, physical memories comparable to phantom pains.

What moments in your career have been the most rewarding/exciting so far?

Linda: Most rewarding is every time we hear that women are healing from the trauma they endured. One in particular was a suicidal seventeen-year-old who is now flourishing and graduating with a masters in nursing. What’s exciting is that Juan Mendez, the former Special Rapporteur on Torture in the UN, told us how proud he was to support us in our work.

Jeanne: For me, most rewarding is the issue to get published. When Linda and I started there was no literature and it was hard to get published. Now, we have a lot published. As for exciting, last year we were in Geneva and went to the UN Human Rights Library and one of our articles was there.

Do you have any advice for fellow alumni and/or students who are interested in advocating to advance a particular cause?

Linda: You have to pick something you’re really passionate about. Being an advocate is very hard work, so you really have to care about it. You don’t often get paid to be an advocate. You have to really believe in it or you’re going to get knocked down. Also, find someone to support you so it’s not a lonely journey. Never give up.

Jeanne: I would add that you really have to know what you want to change. You need to build up a really solid knowledge base and be particular about your issue, stick to it, and not get side tracked. Also, always tell the truth and be transparent.