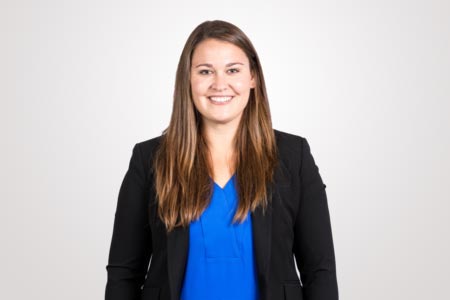 “At Saint Mary’s, I learned how to be independent, break through slumps, push past sports psychology, grow as a human, and face anything.”

What made you choose Saint Mary’s University?

At the time, I was living away in Ontario playing hockey. When choosing a school, I wanted to be closer to home so my family could watch me play hockey. I chose Halifax because it was the place I wanted to go. I selected Saint Mary’s to get more experience, exposure, and games. Also, the opportunity to have Lisa Haley as a coach was a big factor in my decision.

Why did you decide to get your Bachelor of Arts in Criminology?

What is your fondest memory of playing hockey at SMU?

In my final year, as captain of the hockey team we didn’t have the best record. We went into the playoffs in a less than favourable position and we won it all! In the semi final game, we were up by 1 against StFX and we hadn’t beaten them often. With only a minute left, Kyla Thurston BA’12 went into the corner got the puck and passed it to me out front and I shot the puck into the empty net in the last 30 seconds of the game. I don’t think I have ever shot a puck that hard. It’s a fond memory scoring the empty net goal.

What led you to pursue a career in coaching hockey?

Sometimes, I feel like I may have retired a bit too early but hindsight is 20/20. It was my time to move on and take on another role in the game. I was given the opportunity to coach with the Scarborough Sharks. I then applied to the position to be the assistant coach at Ryerson. I also coach midget teams. It has been a hectic year. In the same year, I applied for the position to be the assistant coach with Ryerson’s Men’s hockey team - coaching two teams at once was hectic!

Currently you’re the Head Coach for Team Ontario and the Assistant Coach of the Ryerson Rams. Could you tell us a bit about your roles?

At Ryerson, I’ve been in charge of power play for the past three years. Throughout the week, we all work together in planned practice. Day to day, I’m in charge of community programming that the athletes take part in. I’m also responsible for our academic programming and our camps. It is unique coaching university teams. Helping students achieve both their academic and athletic goals. It’s a lot to balance. Our role is to support them. We’re here to graduate student-athletes and players and ensure they take away a great experience from Ryerson.

How has it been being the first woman in Canada to coach a Men’s USport Team?

Four years ago, I became the first to coach a men’s team. Of course there will be attention that comes along with that. However, I’m here to do a job. I’m here to support the student athletes. The accolades are nice, but at the end of the day it’s a team first mentality. It always has been and always will be.

What moments in your career are you most proud of/have been the most rewarding so far?

Barriers still exist in the sporting world and my main barrier was psychological. Thinking ‘am I good enough?’ That has drastically improved over the past four years. I’ve been working closely with a high performance coach and that has really helped. I thought if I wasn’t at my best, how could I support my team in the best possible way? I think when anyone starts something new, there is always a piece of self doubt. Working away from the rink with the high performance coach has been very rewarding and has impacted my life and career.

Do you feel Saint Mary’s prepared you for your career? How?

Every step along the way has prepared me for my career. I had an opportunity to step in and contribute to a good hockey team right away as a freshman. Lisa Haley was always amazing as a mentor and that helped prepare me. I excelled in school at the university level and felt I could help support others in the academic realm. At Saint Mary’s, I learned how to be independent, break through slumps, push past sports psychology, grow as a human, and face anything.

Do you stay connected with fellow alumni? Do you have any career building advice to offer alumni?

I still connect with my teammates that I had and some of the people I was a regular student with. Everyone is doing great things! We try to have our own reunions, we call them ‘smunions’. Courtney Schriver-Richard BA’11 is doing amazing things, breaking barriers. Amanda Boulegon BA’11 is coaching women’s hockey. Melissa Young BA’10 is an RCMP offer in Calgary. Saint Mary’s alumni are doing amazing things. Cheryl MacDonald BA’10 will be speaking at Saint Mary’s in the next couple of weeks. The most important thing is staying connected and having a support group. Everyone is proud of everyone.

Looking back at your time at SMU, is there anything that makes you nostalgic about your time on campus?

Definitely the arena, which now no longer exists. I spent so much of my time there. It’s unfortunate it’s no longer there, but I’m really excited about the new rink. I also spent a lot of time at the Gorsebrook lounge with other athletes having a good time. I have fond memories of the library also. We used to hang out there a lot. I don’t think about the places on campus often, but I always remember my experience at Saint Mary’s.