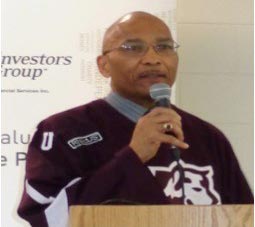 "Having the Coloured Hockey League of the Maritimes honoured with a stamp, for me, validates its historical significance in Canadian hockey; engenders a tremendous sense of pride for what the players achieved despite hardship and racism; and provides an excellent opportunity for all Canadian to learn about the league’s unique history."

How does it feel to be a trailblazer, recognized as the first black man to play hockey in the Atlantic Intercollegiate Hockey League in the 60s?

As Jackie Robinson once said, “a life is not important except in the impact it has on other lives.” My playing in the league in 1967, I’d like to think that it encouraged other Black players to follow such as Darrell Maxwell in 1969 and Percy Paris in 1970 that also played at Saint Mary’s. Years later, people like Andrew Tench, Kendrick Douglas, Dwight Lucas Jr., Mark McFarlane, and Joel Ward began playing in the league at other universities. Joel Ward went on to play in the NHL with the Minnesota Wild.

In some of your articles, you mention that racism is still a part of hockey to this day. Could you tell us about your experience facing racism in hockey?

My first experience was at the University of Prince Edward Island in 1967. Prior to the game, I was skating around during the warm up. It was a small arena and the spectators were close to the ice. While I was skating around, I heard people call out the N-word, spook, and other derogatory terms. Even during the game, I heard the N-word from opposing players and endured physical abuse. Players slashed me behind the legs and knocked my feet from under me. Referees turned a blind eye to what was going on.

In 1969, we played an exhibition game against the Halifax Atlantics, a junior team. One white player tried to start a fight with my defense partner and then later in the game came after me. As we squared off, he was coming straight for me and I hammered him in the mouth and he fell to the ice. The referee intervened and consequently, we were both ejected from the game. The next day, a reporter for the Chronicle Herald ran a story defaming my character and reputation by erroneously reporting that I had butt-ended the Atlantics’ player in the mouth. I thought about pursuing the matter with the Human Rights Commission, but in the end dropped the matter after the reporter called and apologized. The newspaper, however, never retracted the story.

Sadly, what I experienced playing at Saint Mary’s continues in hockey to this day. While some changes have occurred, there is still a long way to go in creating a safe, more welcoming, and tolerant hockey environment. The NHL and Hockey Canada are finally realizing that more has to be done to address issues of diversity and racism in hockey. Four years ago, I posted an “open letter” to the heads of hockey on the issue of racism. I was trying to shed light on racism in hockey, its impact, and the kinds of measures that could and should be taken to address it. I even recommended that a national conference be held to address the issue of racism in hockey. In the annex of the “open letter”, I included a chronology of racial incidents that occurred at different levels of hockey and listed some strategies to improve the game.

You are deeply involved in advocacy work with the hockey community. Could you tell us what projects, initiatives, and associations you are involved with?

Not currently, however, in 2016, I developed a self-assessment tool (Hockey, Diversity and Inclusion Managing Culture Change Self-Assessment Tool) for hockey executives and administrators and sent it to various hockey associations. It consists of a series of questions that can help them assess how they are managing culture change within their hockey organizations in regards to diversity and inclusion. My intent was to help them understand where they are and how they could, perhaps, improve by including practical steps and strategies.

You started The Roundtable on Racism in Hockey that took place in March 2019. What was the purpose of the event and will there be another one this year?

Yes, I helped organize the event with Courtney Stzo, who is an Assistant Professor at Queen’s University in Kingston, ON. The conference was organized as a result of racist incidents that occurred in hockey across the country. The purpose of the Roundtable was to bring together players, parents, hockey officials, academics and the media to address the issues that are contributing to racism in hockey. For me, the event was successful in raising awareness of the issues and identifying solutions. There won’t be a Roundtable event this year. Instead, we’re focusing on finalizing what we call a “Policy Paper for Anti-Racism in Canadian Hockey”. The paper calls for action in several key areas including Settler Colonialism and Reconciliation, training and certification, oversight, data collection, the promotion of diversity. Our intent is to meet and discuss the paper with various stakeholders within and outside of hockey.

Last month, a stamp was issued by Canada Post to honor the 125th anniversary of the Coloured Hockey League of the Maritimes (CHLM). What was your involvement in this project and what does it mean to you for the CHLM to have this recognition?

Back in February 2016, I submitted a suggestion to Canada Post for a stamp to honour the 125th anniversary of the league for its style of play (the butterfly style of goaltending) and innovations (the slap shot) that helped revolutionize the game of hockey, as we know it today. To strengthen my case for the stamp, I requested and received letters of support from Greg Fergus, Member of the House of Commons of Canada and President of the Federal Black Caucus, Tony

Ince, Member of the Legislative Assembly of Nova Scotia and Minister of African Nova Scotia Affairs, Frank Mitchell, President of the Maritime Sport Hall of Fame and Yasir Naqvi, Member of the Legislative Assembly of Ontario and the Attorney General for Ontario, and Greg Smith, President of the Black Cultural Society of Nova Scotia. Having the league honoured with a stamp, for me, validates its historical significance in Canadian hockey; engenders a tremendous sense of pride for what the players achieved despite hardship and racism; and provides an excellent opportunity for all Canadian to learn about the league’s unique history.

Are there any hockey related events coming up that are commemorating Black History Month that you would like to mention?

Here in Ottawa, there will be a number of events held in partnership with Black History Ottawa, the NHL and the Ottawa Senators. On February 3rd, there will be a commemorative hockey game to honour the 125th anniversary of the Colored Hockey League of the Maritimes that will include a ceremonial puck drop. People taking part in the game include Geoff Regan, former Speaker of the House of Commons of Canada and several former members of the NHL’s Ottawa Senators. I’ll even be donning the blades for this friendly game. Also, the NHL has committed to having their Mobile Museum on Black Hockey History visit Ottawa for three days. It features over 200 years of Black achievements in hockey. On February 4th, during the game against the Anaheim Ducks, the Ottawa Senators are hosting a “Black Hockey History Night” that will include a pre-game reception with Hockey Hall of Famer Willie O’Ree, George Fosty, co-author of the ground breaking book Black Ice along with other special guests. There will also be a ceremonial puck drop to honour the Colored Hockey League of the Maritimes involving the descendants of players who played in the league.

What are your most memorable moments playing hockey with the Huskies?

There are two that occurred in 1970. In the first, Darrell Maxwell, Percy Paris, and I were sitting on the bench during a game against Mount Allison University in Sackville, New Brunswick. Coach Bob Boucher looked at us and said, “I want you to go out and play together on the forward line”. We just looked at one another. That was fine for Darrell and Percy, but I’m a defenseman. Anyhow, we went out and played together and in doing so, we made a bit of history in becoming the first and only “all-Black forward line” in Canadian university hockey history.

The second moment took place in Labrador City where we played exhibition games against local hockey teams. Before one of the games, Darrell, Percy and I donned our equipment and proceeded ahead of our teammates to go on the ice. In making our way to the ice, we overheard a spectator standing near the boards say to his friends “I didn’t know our guys were playing against an all-Black team!”

Looking back, I have very fond memories of my experience at Saint Mary’s. My time there was quite exceptional and memorable. As an individual, I felt welcomed, accepted, and respected by Coach Boucher and my teammates, the professors as well as the university’s administrators, who were big supporters of the hockey team. My life has been enriched by the friendships I established with many of my teammates, which still exist today. We keep in touch and attend hockey reunions where we reconnect and reminience about our time at the university and playing hockey.