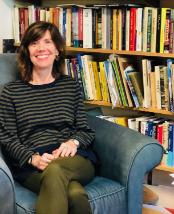 Nicole Neatby has taught in the History Department at Saint Mary's University since 2002 having previously taught for eight years in the History Department at the University of Prince Edward Island. In 2004-2005, she was invited to teach at Yale University as Canadian Bicentennial Visiting Professor. She is co-editor of the Journal of the Canadian Historical Association/Revue d’histoire de la société d’histoire du Canada and French langue editor at Histoire sociale/Social History. She has published in the fields of women's history, Quebec history (student protest movements, commemoration and tourism) and Public history. She is also an active member of various heritage and history organizations having been elected to the Board of the Nova Scotia Women’s History Society and to the Council of the Royal Nova Scotia Historical Society. In 2017, she was appointed as the Nova Scotia representative on the Historical Sites and Monuments Board of Canada.

* Public History. This course introduces students to both the field of public history and the application of history and historical methods in a variety of workplace settings and media. In addition to in-class work, students are called upon to do 8 hours per week of unpaid field work in a local Halifax institution/organization (ex-museum) charged with presenting history to the public.

*History of Canadian Culture(s) from the late 19th century to the present. Particular attention is paid to how culture/s has been produced and circulated in various forms including novels, magazines, music, art, film, radio, television and other public manifestations such celebration of holidays, fairs and commemorative events.

*Gender and Sexuality in Canada: A course that explores the history of Canadian women from the late nineteenth century to the present day.

*Tourism in North America. This course analyzes how tourist promoters marketed various sites and regions of the country and how visitors from the US and Canada perceived themselves and others at different times in our history.

I am looking at mid to late nineteenth century popular stage entertainment in Halifax and a select few Nova Scotia communities in order to chart the rising popularity of blackface entertainment in the province. I am paying particular attention to the activities of the numerous American touring theatrical/comedic companies who performed in Halifax and across the province. Their shows varied in content from classic racist minstrel shows to blackface performances of Harriet Beecher Stowe’s famous antislavery novel Uncle Tom’s Cabin.  I am also reviewing reactions to the numerous performances of Irish author Dion Boucicault’s play The Octoroon set in the US South before the Civil War.

Historiographical overview to the section on Education in Sharon A. Cook, Lorna McLean and Kate O'Rourke, eds , Framing Our Past:  Canadian Women's History in the Twentieth

Member of the Editorial Committee of Canada , Confederation to the Present - a Canadian history textbook on CD-ROM produced by Chinook Multimedia (Edmonton, 2001)