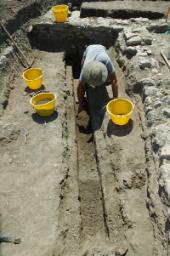 The Basentello Valley Archaeological Research Project (BVARP) is a multi-scalar, multi-disciplinary archaeological research project under the direction of Drs. Myles McCallum (Saint Mary’s University), Hans vanderLeest (Mount Allison University), Tracy Prowse (McMaster University), and Adam Hyatt (University of Michigan). The goal of this project is to understand better cultural change that took place in Roman Puglia and Basilicata (Apulia and Lucania) during the early imperial period as a result of contact between Roman and Latin peoples and the indigenous peoples of the interior of southern Italy. We seek to determine the degree to which there may have been cultural hybridization during this period, resulting in a new and unique cultural system in the Basentello Valley during the Roman period. The Basentello River Valley is ideally positioned for this study as, based on both archaeological and textual evidence, it is located in a liminal position with respect to the cultural groups of ancient Lucania and Apulia, and was an important transport corridor linking the Tavoliere to the north with the Ionic Gulf to the south.

The focus of our research since 2004 has been the excavation of an imperial estate at San Felice/Vagnari, which was identified by regional field survey carried out by Carola and Alastair Small in the late 1990’s. Excavation has been undertaken on a villa at San Felice, a small vicus or village at Vagnari, and a sizeable early imperial cemetery, also at Vagnari. 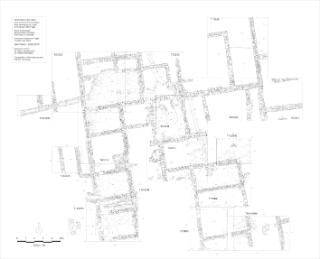 All of these sites are within 1.0 km of each other and were likely located along the Via Appia; their proximity to one another and the fact that tiles stamped with ‘GRATI/CAESARIS’ and manufactured at Vagnari have been found at San Felice, suggest that these sites were part of a single imperial estate. The vicus at Vagnari was built in the early first century AD and continued in use until the sixth century, while the associated cemetery was in use from the late first century AD to the early third century. The villa at San Felice, which may have been constructed on top of an earlier, pre-Roman structure, was built in the second half of the first century BC and went out of use in the mid to late second century AD. The villa, which contains a peristyle and some well-appointed reception rooms, appears to have been a residential structure that shows evidence for the processing of agricultural materials (possibly the making of wine) and textile production. The vicus, whose structures do not appear to have been as well appointed, was an agricultural and industrial village where tiles were manufactured over many centuries, metal was worked, and agricultural commodities were processed.

The site shows evidence for substantial expansion during the fourth century AD, possibly due to its role supplying grain to the city of Rome and the Roman military. The cemetery, which is to the immediate south and east of the vicus, contains primarily tomba a cappuccina-type graves. The persons interred in the cemetery were likely of relatively low socio-economic status, peasant farmers, tenant farmers, and slaves. Recent Oxygen Isotope Analysis and mtDNA analysis suggest that perhaps as many as 20% of the people interred at Vagnari were migrants; indeed, one of these migrants can trace her family origins to north east Asia (Siberia, Mongolia, Northern China), although we do not know if she is the daughter of a woman from the east, or if her north east Asian ancestor had migrated west centuries before. 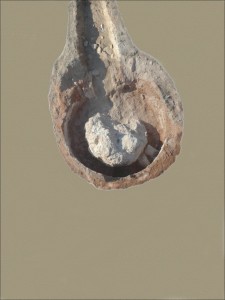 e imperial estate is well suited to an examination of cultural change and hybridization in southern Italy. As an imperial estate, it would have served as a natural point of cultural contact and interaction between Roman and/or Latin migrants and members of local or indigenous cultural groups. Indeed, some might even argue that the site served as a locus for acculturation or Romanization. Artifactual, environmental, and architectural evidence, however, suggests to us that the site was likely locus of cultural hybridization, in part related to demographic changes and environmental factors.