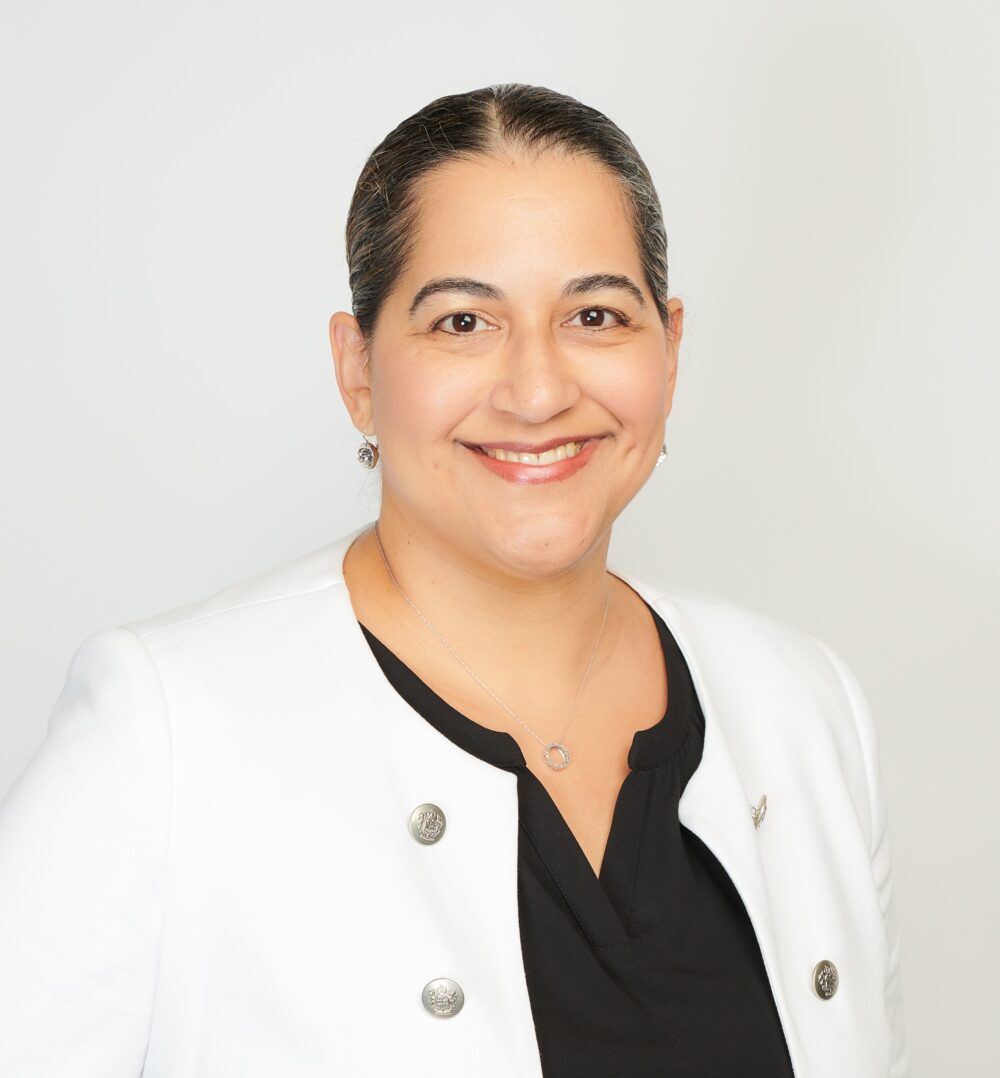 Catherine has over 20 years of experience in the investment funds industry. At RBC Global Asset Management (RBC GAM), she is responsible for the execution and communication of new product initiatives within the individual investor business. Catherine is also a passionate champion for Responsible Investment and works closely with the investment and distribution teams on initiatives related to the integration of Environmental, Social & Governance (ESG) factors and Socially Responsible Investing (SRI).

Prior to joining RBC GAM in 2009 as a Portfolio Specialist covering a number of strategies including fixed income, ESG and SRI, she spent seven years at Phillips, Hager & North in their direct-to-investor business.

Active in her community, Catherine is Vice-Chair of the Whitby Diversity & Inclusion Advisory Committee and a member of the uOttawa Toronto Alumni Council connecting with students interested in a career in finance. She also helps lead an RBC partnership with the Toronto Regional Immigrant Employment Council (TRIEC), and for the last two years has been mentoring newcomers to Canada.

In 2019, Catherine was shortlisted for the Diversity Ambassador of the Year at the inaugural Women in Finance Awards Canada.

Janet L. Ecker is the former President and founding CEO of the Toronto Financial Services Alliance (TFSA), a concept she turned into an influential public-private partnership dedicated to building Toronto as an international financial services centre. With government and industry support, she also established the Global Risk Institute in Financial Services to leverage the sector’s global reputation for stability, as well as the Centre of Excellence in Financial Services Education to capitalize on the region’s talent advantages. The Centre was recognized by the World Economic Forum as a best practice in collaborative public-private partnerships.

Under her leadership, TFSA also led several other successful collaborations among governments and the financial sector, including Canada’s bid to become the North American trading hub for the Chinese currency, the Renminbi and the first public-private sector pilot projects in work-integrated-learning and cybersecurity.

A former Minister of Finance for Ontario, Canada’s largest province, and the first woman to deliver a budget in the province, Ms Ecker also delivered significant public policy reforms during her political career as Minister of Education, Minister of Community and Social Services and Government House Leader. Before entering public life, Ms. Ecker was the Director of Policy for the College of Physicians and Surgeons of Ontario, the doctors’ regulatory body and was the first non-physician to hold the position.

A frequent public speaker and media commentator, she currently sits on a wide range of public and private sector boards, agencies and government advisory committees and is a Senior Fellow of the C.D. Howe Institute and a member of its National Council.

In 2016 she received the Order of Canada for public service, in recognition of her contributions in the financial sector and in her political life.  She also received the “Excellence in Leadership” award from the Transformation Institute for Leadership and Innovation in 2014, a Queen Elizabeth II Diamond Jubilee Medal for public service in 2012 and was recognized as one of the “Most Influential People in the World’s Financial Centres” by Financial Centres International in 2010.  She also received one of “Canada’s Most Powerful Women: Top 100 Award” from the Women’s Executive Network and the Richard Ivey School of Business in 2003.  Ms. Ecker is one of the founders of Equal Voice, a national, multi-partisan organization working to elect more women.

The Honourable Scott Brison joined BMO as Vice-Chair, Investment & Corporate Banking in 2019. As an elected Member of Parliament, Scott served the constituency of Kings-Hants (Nova Scotia) who elected him to Canada’s House of Commons seven consecutive times over 21 years. During that time he served in government for seven years holding key roles, most recently as President of the Treasury Board and Minister of Digital Government from 2015 to 2019, Minister of Public Works and Government Services from 2004 to 2006, and Parliamentary Secretary to the Prime Minister with special emphasis on Canada-U.S. relations from 2003 to 2004.

Mr. Brison is a member of the Trilateral Commission and was named by the World Economic Forum of Davos, Switzerland, as one of its "Young Global Leaders." In August 2010, he was awarded the Order of San Carlos by Colombian President Álvaro Uribe in recognition of his contributions to the Canada-Colombia Free Trade Agreement.

Mr. Brison serves on the board of Bond Resources Inc., the Canada-China Business Council, the Dalhousie University Board of Governors, the Macdonald Stewart Foundation, CJPAC, the advisory board of the Canadian American Business Council and previously served as Chairman of SeaFort Capital Inc.

Mr. Brison earned a Bachelor of Commerce degree from Dalhousie University. He has completed the Global Leadership and Public Policy for the 21st Century Executive Education Program at the Harvard University Kennedy School of Government.

Previous to this role, Alexandra was the Chief Operating Officer for Dockside Investco, a Nova Scotia-based portfolio management company; as well as the CEO for Baie Run Pet Products, a natural products start-up, focused on pet wellness including, omega3s and supplements sold in the U.S. and Canada. In addition, Alexandra has been an Investment Attraction lead for Nova Scotia Business Inc. (NSBI) covering clean tech, ocean tech, life sciences, as well as bioresources, agri-foods and seafoods. She has also held positions with the Export-Import Bank of the U.S. (Ex-Im Bank) in Asset Management, as well as the Office of Renewable Energy & Environmental Exports, focused on global infrastructure, structured and project finance.

Alexandra McCann holds an MA in Pacific Asian Studies from the University of London, School of Oriental African Studies (SOAS) and a double BA from the University of Virginia in Asian Studies and Anthropology. Alex is a Certified International Trade Professional (CITP) and a member of the Board of Governors at the University of Kings College. Alex is also on the board of the Inspirit Foundation—which promotes an inclusive and pluralistic Canada—both on the Equity Committee and the Impact Investment Committee. Alex is obsessed with saving handwriting, enjoys travel, politics, and sampling all of Nova Scotia’s culinary delights!

Martha is Volta’s Chief Executive Officer. Martha joined Volta in 2018 as Chief Operating Officer. Before Volta, Martha was the Chief of Staff and Executive Director in the President’s Office at Dalhousie University, where she was the project manager for Nova Scotia’s participation in the MIT Regional Entrepreneurship Acceleration Program and worked with stakeholders from across the province to support inclusive economic growth. She also worked in New York City Mayor Michael Bloomberg’s administration over two terms before returning to live in Halifax. Martha has held leadership roles in organizational change, project oversight, and economic development. She currently sits on the boards of directors for the Halifax Chamber of Commerce and has volunteered with a number of organizations aimed at building confidence and competence in girls, supporting new immigrants’ entry to the workforce, and economic capacity building. Martha holds an MPA from New York University, an LLB from Dalhousie, and a BA from Bishop’s University.

A proud Maritimer, Alyse has worked in television for over a decade as a reporter, producer, anchor, co-host, and weather anchor. Alyse spent the majority of her career at CTV Atlantic, before stepping away from television to take on a public relations role in 2018. She returned to the airwaves in 2019 as co-anchor of Global News Morning.

Alyse was born and raised in Bedford, N.S. She studied at Dalhousie University and Acadia University before settling in at Nova Scotia Community College to pursue broadcast journalism.