Thanks to the generosity of  Dr. David Sobey, the Sobey School of Business at Saint Mary’s University is home to one of a few Canadian university centres on
retailing and services. The new David Sobey Centre for Innovation in Retailing and Services will be the leading source of expertise pertaining to retail and
service management in Canada and play a vital role in building a sector that tops the ranks in terms of share of total employment in Canada.

Dr. David F. Sobey is Chair Emeritus of Sobeys Inc. He has served as a director of Sobeys Inc. since 1998 and of earlier Sobeys’ companies beginning in 1958. He is a member of the Advisory Board for the Sobey School of Business at Saint Mary’s University, and an Honourary Director of the Atlantic Salmon Federation and the Royal Nova Scotia International Tattoo.
Dr. Sobey was the first lay Chancellor of Saint Mary’s University, serving with distinction from 2008 to 2010. He has supported Saint Mary’s as a member of the Board of Governors, and as Chair of Building on Strength, a capital campaign that ran from 1993 to 1998 and raised more than $24 million.
Much honoured for his many contributions to education and society, Dr. Sobey received an honorary Doctor of Commerce degree from Saint Mary’s University in 1991, and was inducted into the University’s Turning Points Hall of Leadership in 2007. He also holds honorary degrees from Mount Allison University and St. Francis Xavier University, and was appointed a member of the Order of Canada in 1995. 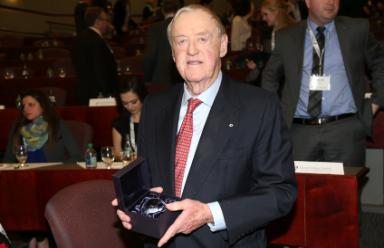 Saint Mary's University's presentation to Dr. David Sobey at the launch of the David Sobey Centre for Innovation in Retailing and Services.