It’s a snowy February in Nova Scotia and ordinarily Scott Allan would be thinking about Emera’s electrical grid. Instead, he is meeting with Theresa Jahn, a scientific affairs manager for Nature’s Way with a medical background, and they are talking about the aerospace maintenance repair and overhaul market.

They are putting the final touches on an assignment about their client, IMP Aerospace and Defence, whom they will represent on the Sobey Executive MBA International Trade Mission.  The trade mission is woven in to Dr. Mark Raymond’s International Business course, and the mission itself is looming large in late March. It’s a heck of a midterm, a nine day intensive trade mission meeting with industry professionals representing a company and an industry neither have deep experience with.

Before November, neither Theresa nor Scott had thought much about the scope of IMP’s work. Since the pair were matched with the company they have researched the industry, toured the IMP facility, met with company representatives and gotten fairly conversant with the potential market for maintenance, repair and overhaul in Denmark.

They are one of six teams representing Nova Scotia and Atlantic Canada companies, ranging from relatively small food producers to large ocean tech organizations. From March 29 – April 6, the teams will represent their companies and the Sobey Executive MBA program on a fast-paced trade mission to Europe. Working with partners like ACOA and business match-makers Kisserup, the Executive MBA program hosts an annual International Trade Mission to a targeted location. In the past, the classes have travelled to Singapore, Bogotá, Ho Chi Minh City, Sao Paolo and Warsaw, among others. The school has built a reputation for delivering impactful programming, and this mission has received warm praise from businesses, alumni and government officials.

“We are proud to deliver an educational program that profoundly transforms the participants and at the same time, has a positive impact on the economy of our region,” says Mark Raymond, who, in addition to teaching this course, was, at the time, the Associate Dean, Academic of the Sobey School of Business. 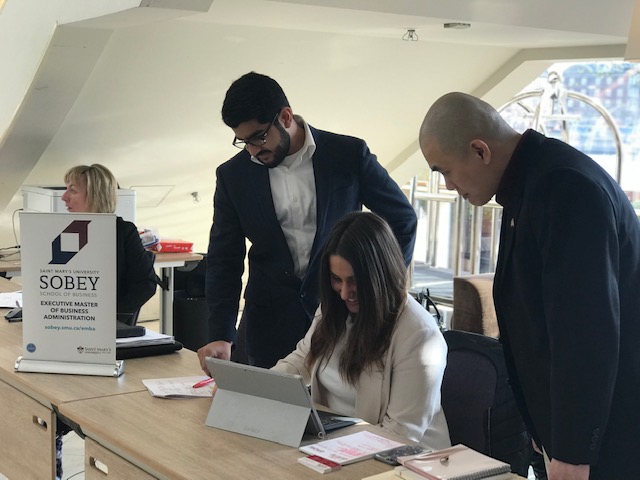 Theresa Jahn is a scientist and an educator with a medical background. Her current role is Scientific Affairs Manager with Nature’s Way of Canada, a long established and reputable supplements producer based in Dartmouth. Scott Allan is an engineer with a career history in the energy sector, specifically oil, gas and electricity – he is currently Business Development Manager for Emera Utility Services.

“I had always been interested in business. The Executive MBA program offered a way to learn more, quickly, while still working in a challenging role,” says Theresa. “The evidence-based management focus appealed to me, with my science background, and the potential to develop my leadership capacity and prepare myself for new future challenges was very appealing.”

Scott concurs. “I know that I wanted to continue to progress along a path to leadership. An MBA offered a way to acquire new knowledge and skills, and an executive MBA in particular would be a good way to learn from a network of others in leadership roles.”

The International Trade Mission is a rite of passage these two second-year students have been looking forward to.

“I am looking forward to the challenge of representing a company outside of my industry and in a foreign market,” says Theresa. “The trade mission is a really unique challenge that most people don’t have the opportunity to experience. We are totally outside our fields of expertise, and our market.”

“In our case the skill set we’re honing is really relationship building,” adds Scott. “When you add in the different cultural context, that becomes more challenging.”

Cultural context reminds the pair of the additional player in this scenario. `

Kisserup International Trade Roots has been an important partner in the Sobey Executive MBA Trade Mission. Theresa and Scott both note that in November, not only were they brought together with IMP, but Kisserup was there. The company conducted trade research and helped develop a scope document to plan their goals and strategy for the individual business-to-business meetings during the trade mission. Kisserup develops the agenda of meetings and sets up contacts in consultation with the program manager and a government representative. And then, they manage all the in-country logistics during the mission.

“Their role was invaluable,” says Scott.

It’s April now, and the snow has finally started to give way to spring. Theresa and Scott have just submitted their final report to Dr. Raymond.

The pair met with representatives of five companies over three days, among the whirlwind of other activities and learning on the 9-day 2-city trip. After each meeting, they prepared a one to two page summary and sent it immediately to their IMP contact.

”Gathering intelligence was challenging, but because our visit was framed as students learning, the company representatives were fairly open,” says Scott. ”We knew Denmark was a small military market, but its location in Scandinavia makes it a good place to shed light on the region.”

They will retain a powerful memory of this achievement, and newfound sense of authority.

“With every meeting your confidence grows,” says Scott. ““This will certainly translate back to my own career, and help me to better tackle business development opportunities in the future.”

“I’m proud of the work we did” adds Theresa. “This experience has been incredible. I believe it has already impacted how I approach my regular work.”