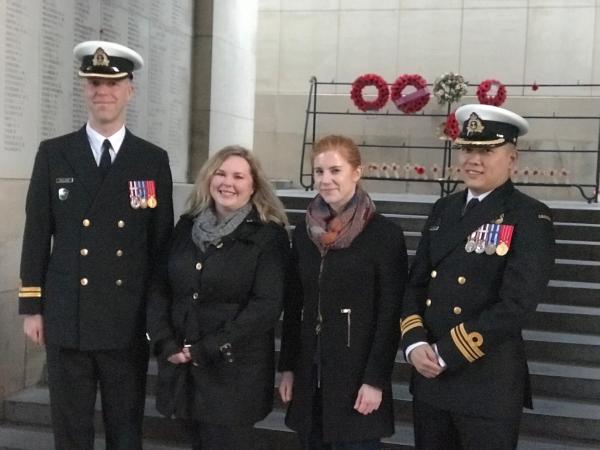 The Sobey School Executive MBA International Trade Mission is intended to bring all the lessons learned through the program into focus in an applied setting. Preparation for the course is wound into Dr. Mark Raymond’s International Business course. However, Executive MBA learning outcomes extend beyond classroom lessons. Students build their professional confidence and deepen their understanding of themselves and their capabilities.

As a team, their role was as fact finders for IMP Aerospace. In day-to-day life, Scott is an engineer employed in business development with Emera. Theresa is the Scientific Affairs Manager with Nature’s Way, a natural health product manufacturer located in Dartmouth.

The business meetings were a central focus for both. “It was a challenge not everyone gets to experience,” said Theresa. “I don’t know if I would say I was nervous about (the meetings), but I was anticipating them, wondering how we would navigate the business skills and intercultural skills required.”

“The skillset you’re honing is relationship building. At every meeting, my confidence grew,” reported Scott.

In addition to the B2B meetings the team was prepared for, the group toured two businesses in Belgium. One was the de Ghentse Gruut brewery, and while that facility was interesting, both Theresa and Scott had high praise for the Daskalides chocolate factory where the owner and CEO led their tour. “I could have stayed and talked with the owner for hours,” said Scott “He was sharing his life lessons directly and it was so interesting.”

Theresa agreed. “The owner was so generous… he spoke at length about his career and experiences. Plus, with my current role in a manufacturing environment, it was fascinating to be able to compare the realities of two very different industries.”

In Copenhagen, the Executive MBA team were treated to a tour of Novo Nordisk, a world leader in the production of insulin, ironically a treatment discovered by a Canadian.

“They gave us a very warm welcome,” said Scott. “Knowing little of the company beforehand, it was incredible to engage directly with such an impressive company and to learn about the high standards they employ in their corporate social responsibility initiatives.”

Theresa had an extra interest in the company. “Earlier in the EMBA program, I had prepared a paper on Novo Nordisk’s sister company, on how they operate and work to achieve the UN global sustainability goals. To visit the company and hear about their production and commitment to sustainability in person… it was wonderful.”

Theresa and Scott did other reconnaissance while in Copenhagen. “We are both interested in environmental matters, so we also learned about their world-leading waste disposal system – they burn garbage for fuel, and it’s so efficient they are now importing garbage. The entire facility has an artificial ski hill built over it. It’s such a forward thinking place in terms of sustainability.”

The trade mission journey was structured to include a day designated a “cultural experience”. The intercultural aspect of the trade mission is important, but this stop was as much about deepening the students’ appreciation of Canadian history as anything. The group travelled to the Menin Gate in Ghent, Belgium, Vimy and Passchendaele. The timing of the trip put it about a week out from the 101 year Vimy anniversary. The experience was moving.

“Some of the class are in the forces, so that was extra meaningful for them. Being at those sites… you will always remember it,” said Theresa. “It’s difficult to put the experience into words.”