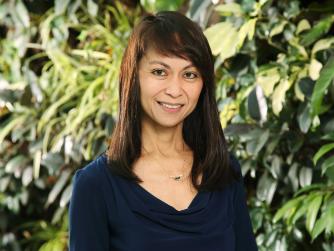 Edna Keeble (Ph. D., Dalhousie University, 1994) is a Professor of Political Science and served as Department Chair for six years (2003-2004; 2009-2014). Her current teaching and research ‌interests centre on Canadian foreign policy, re-definitions of security, and linkages between politics, gender and sexuality. Since joining the Department in 1990, she has been committed to being a well-rounded scholar and has balanced her teaching and research with a commitment to service, not only to the university but also to her profession and larger community.

Research: Her research has focused on security and has broadly covered the themes of national security, feminist definitions of security, and human security. She has written along both more traditional and critical feminist lines on her work on security, but her record goes beyond scholarly writing. She has been part of two substantial projects funded by the Canadian International Development Agency : one addressing prostitution in the Philippines funded through the University Partnerships in Cooperation and Development (UPCD) Tier 2 Linkage Project Grant (1999-2004); and the other focusing on security and cooperation in the Asia-Pacific region funded through the Bilateral Partnerships Program (1997-2000; 2000-2003). In addition, she was part of a three-year (2003-2006) collaborative, university-community research and public education project on security and immigration funded by Status of Women Canada and Canadian Heritage.

Service: Since joining Saint Mary's in 1990, she has been heavily involved in the university and has sat on numerous committees and boards, including the Senate and the Board of Governors. Outside of the university, she was a member of the Advisory Board of Foreign Affairs Minister Lloyd Axworthy (1997-2000), was an inaugural member of the federal government's Cross-Cultural Roundtable on Security which advised the Public Safety and Justice Ministers (2005-2009), and was a member of the Canada Border Services Advisory Committee (2007-2010).

2014. Keeble, Edna. “The Cross-Cultural Roundtable on Security as a Response to Radicalization." Religious Radicalization and Securitization in Canada and Beyond. Eds. Paul Bramadat and Lorne Dawson. Toronto: University of Toronto Press.

2009. Keeble, Edna. “'Smartening Up': How an award-winning teacher learned how to teach first-year students.” Paper presented to the Annual Conference of the Society for Teaching and Learning in Higher Education. Fredericton, N.B., University of New Brunswick, June 17-20.

2008. Keeble, Edna. “Who Speaks for Muslim Women?: Voice, Community and Security in the Post-9/11 Era.” Paper Presented to the Oxford Round Table: “Women in the Modern World: The Struggle for Equality,” Lincoln College, Oxford University, Oxford, England. March 16-21.

2007. Keeble, Edna. “Getting Our Attention in First-Year Courses: Students with Talent or Those with Motivation?” in Atlantic Universities Teaching Showcase 2006 , eds. Allyson Hajek and Elizabeth Noseworthy. St. John's: Memorial University of Newfoundland: 183-195.