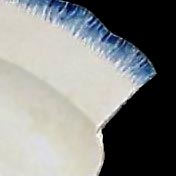 This project is meant to be an aid to help with identification of ceramics found on historic period archaeological sites in Nova Scotia.

The collection of ceramics included in this database is not meant to be comprehensive, although future expansion of the database is expected at a later time. The focus is largely on ceramics dating from the eighteenth and nineteenth centuries.

The ceramics are arranged roughly chronologically, starting with the earliest ceramic types.

A bibliography at the end of the ceramic catalogue offers some references for more detailed descriptions of ceramic types.

Funding for this project was provided by Saint Mary's University and the Student Employment Experience Program. The camera equipment was provided by the Department of Anthropology at Saint Mary's University. Technical support, bibliographic material, artifacts and computer access were provided by the History Section of the Nova Scotia Museum. Thanks to David Christianson (NSM) for making the Museum's collections and facilities available for this project. Thanks to Stephen Powell (NSM), who provided expertise in ceramics, HTML and computers. Thanks to Dr. Stephen Davis (SMU), who provided organization and design ideas throughout the project, as well as moral support.